The price calculator gives you the opportunity to calculate the trip price before the start of the journey if you choose the “pay as you go” option.

You can calculate the price of the trip for the “pay as you go” option here:

On what basis are you still processing my personal data, even though I have requested that it be deleted?

The CityBee Privacy Policy provides detailed information on the purpose of processing your personal data and the duration of storage thereof.

Can I purchase car screenwash with a „Circle-K“ card?

No, car screenwash can not be purchased with a „Circle-K“ card.

How do I turn on the engine (In Lithuania only)?

Do you pass on my personal data to third parties? Who processes my data? In which countries is my data processed?

In all cases, we ensure that third parties providing services comply with our obligations of confidentiality and proper protection of personal data.

If necessary, your personal data may be provided to state and municipal authorities in accordance with applicable legislation and / or our legitimate interests.

After an accident involving a CityBee car used on your behalf, your data is transferred to insurance companies and, if necessary, to other parties involved in the accident.

CityBee also has the right and, in certain cases, the obligation to pass on information about road traffic offences committed by customers (e.g., speeding, drunk-driving) to the responsible authorities (e.g., the Police).

The CityBee Privacy Policy provides detailed information on the purpose of processing your personal data and the duration of storage thereof.

How do I complete the trip?

You can always finish your trip in this area following the road traffic rules. Do not leave the car in disabled parking space or in reserved areas. Attention – green zones are different for electric cars, cars and vans.

You can leave the car in this area with an additional fee. The fee will be added to the price of the trip. Please note that the fees may vary for different zones, you can find out the fee by clicking on the area.

After completing the trip and parking, make sure that you have not left your belongings in the car, as well as that you have not taken car documents or accessories with you. Remember to leave the key in the car, put it in the same place you picked it up from or leave it in a place where another customer can easily find it. Make sure all windows and sunroof are closed.

When you get out of the car, open the active reservation in the mobile app and select the “End trip” command and confirm this action. Check that the car door has been locked successfully.

You should change your CityBee self-service password. You can do this on the website by clicking “I forgot / I want to change the password.” The system will then ask you to provide your email address linked to your CityBee account, you will then be sent an email with instructions explaining how to change your password.

Is smoking allowed in cars?

Smoking is prohibited in CityBee cars. A fine for smoking in a car is €50.

CityBee CEO Kristijonas Kaikaris says that while most of the company’s customers are conscientious and responsible drivers, some ignore the rules of the road. The new speed-tracking system is meant for them above all.

“The statistics show that speeding is still a big problem in Lithuania, so we have to address it all together and start with ourselves. This time CityBee is helping to increase road safety by using technology which enables the proactive prevention of accidents,” Mr Kaikaris says.

Following the upgrade, CityBee drivers that significantly exceed the speed limit are notified automatically. They receive a phone call with a recorded warning, and if they do not answer the call, a text message is sent. The measure works well – most drivers understand and take the warning well, with more than half of them immediately taking their foot off the accelerator. 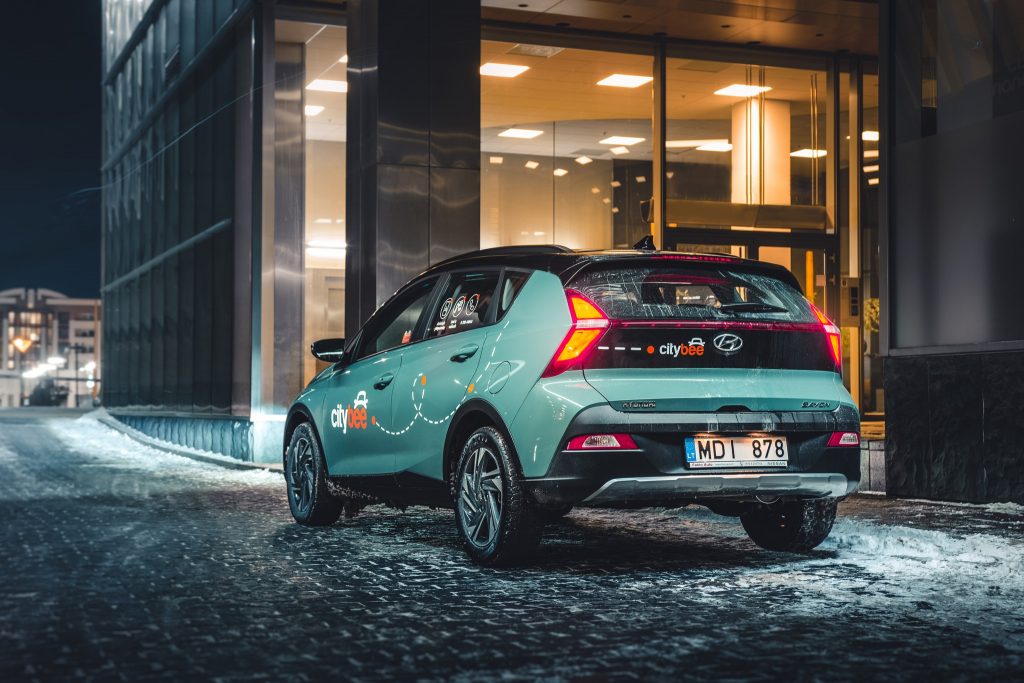 According to Mr Kaikaris, in situations where drivers blatantly and repeatedly ignore warnings to reduce their speed, CityBee will take a principled approach: it will block such customers – for their own safety and the safety of others, they will lose access to the company’s services

CityBee’s new system can detect not only the actual speed of the car a customer is driving but also the speed limit on specific sections of a road. That makes it much easier to assess the appropriateness of a driver’s chosen speed. Whether it is in the old town of a major city, on an urban artery like Geležinio Vilko Street in Vilnius, or on a highway between two cities, CityBee’s system reacts in real time when a customer sharply exceeds the speed limit.

As the preventive speeding alert feature is still being fine-tuned for optimal performance, the company says isolated errors of precision are likely to occur but identifying them will help ensure the long-term goal of effectively encouraging people to drive more safely and responsibly.

Alerts about speeding are not the only ones CityBee customers receive. They also get automated calls with recorded messages, or text messages, if they forget to turn off a vehicle’s engine after a trip or accidentally take its keys with them.

One of CityBee’s long-term priorities is a focus on boosting drivers’ sense of responsibility, to improve behaviour and safety on the road. Thus, the company also notifies its customers in real time about weather conditions that make driving difficult and about the condition of roads in outlying areas. Related messages in its app include not just factual information but also tips on safe driving. And CityBee has zero tolerance for driving under the influence – it fines drunk drivers €2,000 and revokes their right to use its services.